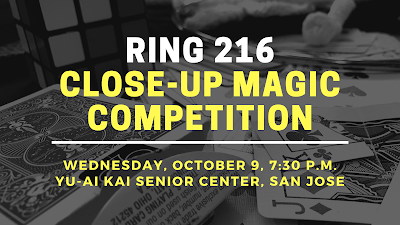 It's time for some more magic!

The 2019 Close-Up Magic Competition is just around the corner — Wednesday, Oct. 9. Come on out to support your fellow magicians as they present their best material in a formal, close-up setting... think Close-Up Room at the Magic Castle (without the cover charge).

And be sure to bring your friends and family because magic is always better when there are more people to enjoy it! Your guests can be fellow magicians or, preferably, non-magicians who love magic.

Whether you're a past winner, a brand-new entrant, or something in between, now's your chance to share your routines and show off your skills. This is a great, low-stress way to hone your act and get feedback. Remember: The goal is to do your best and not focus on winning. Just have fun!

If you're thinking of competing, please keep in mind the following information:

Bay area magician Theron Schaub lectured on his work in corporate magic at the September 2019 meeting of Ring 216. The kick-off was a performance of his carefully honed platform show, designed for audiences of financial advisers, which smoothly integrated chosen effects with corporate messaging. In the explanations that followed, Theron shared a multitude of details of his handling and presentation, from the intriguing which-hand coin routine to the surprising ring-on-string penetration that ended with the ring in a sealed envelope in his wallet. But the most important point for Theron is that the magic is in the background: the primary goal is to get the message across. His transformations of abstract concepts, such as market probabilities and financial planning, into commercial magic effects were some of the most engrossing parts of the lecture.

Then the subject turned to walk-around performance, and in particular how to get past the stigma that magic is for children. Theron described how before the show he tries to make friends with a third of the people present, who at first assume he is an attendee at the event—only when they ask what he does that he discloses he is the hired magician, which leads into the first effect (which is never a card trick). He discussed his favorite effects, how he carries eight tricks on him at all times, but he is also able to do three hours out of a case without a repeat.

Theron rounded off the lecture with a focus on card magic and explanations of his handlings of some of the most commercial card routines.