Zoom link will be sent to members and other paid attendees on the day of the event. 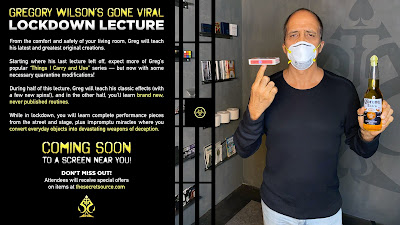 Ring 216 was treated to a live lecture by Nick Lewin, Zooming from his home in magical and musical Austin, Texas on July 14, 2021. Nick’s cheerful manner and big smile were notable throughout the lecture. Reflecting on his beginnings in magic, he credited his mentors Ken Brooke and Billy McComb with changing his life leading him to develop his goal as a comedy magician presenting “Strong magic, made funny.”

The effects he lectured on, drawn from his lifetime repertoire, demonstrated his working requirement of “Packs small, plays STRONG.” He described in impressive detail his favorite opener, the Color-Changing Silks, covering many little touches over the years, and giving thoughtful answers to questions from the magician Paprika and others in the audience. He segued smoothly into the Bill in Lemon, always speaking during the transition, never allowing a dull moment on stage. His message: you are controlling the audience - when to laugh, when not, when to applause, when to stop applause, and to do this keep eye contact with the audience (even if you can't see them for the stage lights) and smile.