About the lecture:
Direct from Las Vegas Chris "Scandal" Randall will be covering his original approach to street magic including his critically acclaimed bill in lemon routine, The Inception, as well as Ashes, Chris' visual approach to the ace assembly.

Do you want to work restaurants? Chris is a seasoned veteran of the restaurant magic scene and will be sharing his hard-earned secrets of the trade in this rare lecture appearance.

About Chris:
Chris Randall was born and raised in Las Vegas, Nevada, the entertainment capital of the world.  His impressive upbringing lead him to be one of the top sleight of hand artists in the world today. He spent his childhood on the back stages of the Las Vegas Strip, developing a love of this craft from the masters of Las Vegas entertainment. While most kids were playing sports and video games, Chris was learning about Frank Sinatra, Elvis, and the History of the legends of Las Vegas entertainment.  As a teen he attended the Las Vegas Academy of Performing Arts, majoring in Theater, Dance, and Technical Theatre.  He studied during the day, but at night he became the house magician of the Stratosphere Hotel and Casino, or was hired for private parties or corporate events on the Strip.  After graduation he began traveling the world with his unique brand of magic, introducing Las Vegas History with cutting edge magic technique.

Over the next 15 years Chris brought his magic to the world.  He toured Lebanon, Egypt, Japan, Canada, Mexico, Athens, Cypress, and across the United States appearing in review shows, on cruise ships, and television.  He is also the creator of over 50 magic effects which have been published in Magic Magazine, MUM, the Penumbra, and released on the DVDs; Sweet, Live at the Magic Castle, Sugar High, and Magic at the Bar.  Chris presents many lectures across the globe and has been featured at the famed Magic Castle in Hollywood.  He has also acted as a consultant to top magicians and shows including The World’s Greatest Magic show in Las Vegas, Las Vegas Illusion in Tokyo, Japan, The Art and Illusion Magic Festival in Athens, Greece, and The Masters of Illusion television series on the My Network.   Chris’s creative and original sleight of hand magic has gained him the reputation as one of magic’s rising stars. 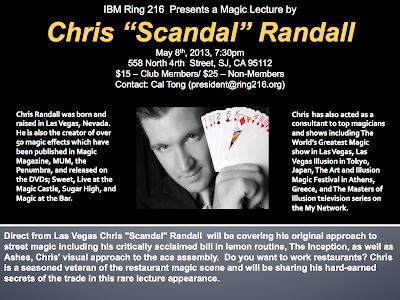